Alternative, more wordy title: “How one small comment in a video sermon reminded me of the time an old Navajo man named Morris charged us $25 to see a dinosaur track in the middle of nowhere.”

But let’s stick with “Imprint”.

I was watching a video sermon yesterday about finding your purpose and passion in life.  The speaker said that when we’re living for the Lord and doing what we were called uniquely to do, we’ll leave our imprint on the world.  Not for our own glory or recognition, but for the name of Jesus.

And somehow, that small word “imprint” gave me an immediate visual memory of dinosaur tracks in the desert.  We took a road trip to the canyons region of the southwest USA a few years ago.  On the highway somewhere between canyons, we kept seeing billboards enticing us to stop and see the “Dinosaur Tracks”.  Why not?  We followed the signs, expecting to see a flashy tourist spot.  Instead, we saw a crudely hand-written sign on a piece of wood letting us know we were there.  And Morris, the toothless Navajo man, told us that for $25 (each) he would take us to see the tracks. 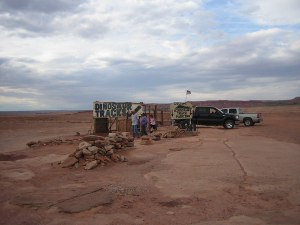 Sometimes you just know you’re being taken advantage of, but you’ve driven 30 miles out of your way, so you pay the $25.  He walked us way out in the middle of nowhere.  And then, there they were.  With the red sand brushed away, we saw these in the rock. 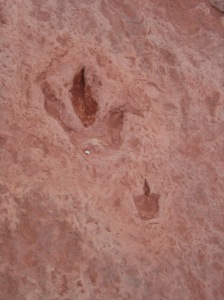 Morris told us it was an adult dinosaur track and a baby one.  It was actually pretty cool to see.  We took our pictures and drove on to our next destination.  And really, I haven’t thought about that side trip in years.  Until now.  Now, when the pastor in the video talked about leaving my imprint on my world.

Will people know that I’ve been here?  Will the imprint I leave in my little corner of the world reveal that I didn’t walk alone?  That I walked with God and made His name known?

The dinosaur tracks were literally in the middle of nowhere.  And maybe sometimes we feel like where God has placed us isn’t the flashiest of ministry areas.  But, what if we’re faithful to just do what we’re called to do and be who we’re called to be, and someday, after we’re gone, people will know that we were there because we left…an imprint?

Thanks, Morris.  Your $25 tour into the middle of the desert has reminded me years later that I need to leave tracks of my own.

They will proclaim my glory among the nations.  Isaiah 66:19

Let your light so shine before men, that they may see your good works, and glorify your Father which is in heaven.  Matthew 5:16

That you would walk worthy of God who calls you into His own kingdom and glory.  1 Thessalonians 2:12

The desire of our soul is for Your name
And for the remembrance of You. Isaiah 26:8

I come from a pretty reserved lot.  Swedish/Swiss/German.  People groups not exactly known for their outbursts of enthusiasm.  Oh, and then add that I’m basically an introvert who nearly died the other day when my car horn got stuck ON in the middle of rush hour traffic.  Seriously, I was looking for a rock to hide under.  Rocks big enough for me and my car were in short supply on the busiest route out of West Palm Beach at 5:00pm.  I’ll do anything not to call attention to myself.

All that to say that when I came across a verse the other morning that talked about shouting joyfully, I was tempted to just write it off as a nice way to say we should be thankful that God is who He is.  Surely, there’s not supposed to be literal shouting.  Right?

And then I decided to really study it.

To “shout joyfully”  comes from a Hebrew word that literally means to “give a ringing cry”.  “Jubilant shouting” was another definition, and then there was “raise a sound, cry out, give a blast”.

An introvert’s bad dream.   But on the other hand, even we introverts usually have no problem cheering for our favorite teams or giving a hearty round of applause for a great performance – maybe even a standing ovation.  Doesn’t God deserve at least that?

We may be settled in faith traditions where public displays of worship aren’t all that common.  And yet, maybe we need to shake things up a bit and not be so reserved in our gratitude and celebration of our God and King.  We’re told to shout!  Sing!  Cry out!  Be jubilant!

Don’t look for me to be dancing the aisles anytime too soon.  But I’ll be thinking about those Israelites and their shouts of joy a little more often when I read through the Psalms.   And if you do hear a shout, don’t panic.  It might just be an introvert who broke loose when they found their joy.